Thought I'd mention that I was not, as predicted, eligible for E.I. Quelle suprise eh?

On the plus side I was hired by Carewest (they got to know me when I was working for office jobs). They asked me if I was free so they could hire me through officejobs, I informed them I was no longer WITH officejobs so they hired me as a casual. So, I did, in a roundabout way, get a little bit of revenge on officejobs as they've dipped out on several hundred dollars (so far) that they would have made from Carewest. The best part is that Carewest isn't obligated to pay them a "finder's fee" as I wasn't on officejobs books when Carewest hired me.

My pregnancy is going well. I'm 25 weeks now and still nauseous every day. Something they DON'T tell you about pregnancy in school is that it can cause carpal tunnel syndrome. I think, of all my pregnancy discomforts that the carpal tunnel is the worst. I feel like I'm wearing a glove on each hand that is filled with crawling beetles.

We know the sex of the baby, it's a girl. We've decided on a name but that's going to be a secret (unless Kristy blabs) until delivery day.
Posted by Rean House at 4:26 PM No comments:

As mentioned in my previous post I am pregnant (13 weeks, 2 days) and HAD a job at the drop in centre.

Well, hold onto your butt because I've got a helluva story to tell!

As you may be aware, there is a little bit of a flu going around. They call it "SWINE FLU!!!!!!!" People. Young people. People with chronic health conditions. And pregnant women are dying from this flu. My mother works in a medical office and on Oct. 29 she heard that 3 pregnant women had died in the past week from swine flu and that another was fighting for her life in ICU. This, as you can imagine, caused her some distress when she thought of her only daughter who has diabetes and a bun in the oven working in a homeless shelter in downtown Calgary. So, to protect her only chick she came to the Drop In Centre (hereinafter referred to as "the DI") and asked me (well, actually TOLD me) that I was getting an H1N1 shot now if not sooner. I took her upstairs with me to tell my boss that I was leaving early to get my H1N1 shot. In the course of our conversation my mother mentioned my pregnancy. My boss said it was fine for me to go and get my shot and I told her that I'd see her on Monday.

That night I stood in line for 4 hours with Chris and got my H1N1 shot. My luck being what it is I spiked a fever and felt sick the very next morning. I went to the doctor and was informed I had (probably) H1N1. I phoned my boss and informed her of the situation and told her I'd be back in 10 to 14 days. She said, fine, I asked if i needed a doctor's note, she said not to bother as she could tell from my voice that I was sick.

On November 12 I was feeling human again and returned to work to take my CPR course. After my course I was called into the hiring manager's office (his name is Steve). He informed me that "we" had a "couple of problems". The first problem was that I'm pregnant and they just weren't sure I could fulfill my duties (let me remind you that I am a secretary!) The second problem was my mom. They were "disturbed" by the way she "stormed" into the DI.

Now, Steve not only works for the DI, he also works for Officejobs. I asked Steve if, since they were firing me, I could return to officejobs and temp. He informed me that Officejobs was no longer "comfortable" having me on their books because my mother's behaviour was too "erratic" and they couldn't feel safe that she wouldn't "charge into a client's office" to come get me in the future. He said that he's been in HR (human resources) for 15 years and had never seen a 28 year old woman be "dragged out of work by her mother".

I haven't received my final paycheque yet (even though they fired me over a month ago). I did however receive my ROE (record of employment) from officejobs. I was amused (but not surprised) to see that under my reason for termination they put "insufficient work". What a bunch of cowards. They don't even have the integrity and honesty to say why they fired me. Although, thinking about it, is there a governmental code for "Sarah's mom scares me"?

I'm not so mad at the DI for firing me (I wasn't really enjoying it there. I've found that before I worked there I used to be very sympathetic to homeless people but working there soured me. I am very angry at officejobs for taking me off their books. They've essentially denied me the opportunity for future employment. I've been hobbled.

So, Chris and I are back to surviving (there's really no other word for it) on just his wages. I really have no idea how we'll survive once the baby arrives. Knowing my luck I won't be eligible for EI (despite having paid into it since age 14).

Happy Chanukah to my Jewish friends.
Posted by Rean House at 8:33 PM 2 comments:

I've had an anxious couple of weeks. I had my IUI treatment in September and was told to take a pregnancy test on October 11. I took the test on October 11 and it was negative. Meanwhile I've been miserably nauseous, able to smell a single scent molecule from a mile away and haven't have a period. Finally, tired of constantly carrying a pad around with me, and running to the bathroom every 3 microseconds to make sure I'm not bleeding and therefore ruining my trousers, I peed on a ClearBlue digital pregnancy test. I figured it would be negative (as usual) so left it to do its thing while I made myself a snack. Snack in hand I checked the stick and noticed that the digital read out read: "pregnant". I did a double take and read it again. It still said "pregnant". Utterly speechless I grabbed poor Chris by the scruff of the neck and dragged him (poor thing was quite confused by my behaviour) and thrust the stick at him. I then burst into tears (like you do).

I have, of course, called every living person within the Mountain time zone to share my news.

I'm absolutely ecstatic at the moment. I had really started to give up hope. I thought we would certainly be going through IVF and that even that would probably fail. I'm nervous about a miscarriage but I will cross that bridge if I come to it.

On the bad news side of things. I called my mother to tell her the good news and she informed me that my biological father was in the hospital and will probably die tonight. I feel bad about that. Even though I barely knew him, I still love him and am sorry that he's dying. Obviously I can't go down to see him (and what would be the point?) I'll try to make it out to the funeral though.

In other news. I've got a job at the drop in centre in Calgary (a homeless shelter). I'm working as a medical office assistant with 2 doctors and an RN to whip into shape. I started on the 13th and am enjoying it so far.
Posted by Rean House at 10:58 PM No comments:

Why I Prefer Dogs to People

Things that bring me joy. Apparently the injured dog did later die from his injuries. There was a massive hunt for the rescuer but they never found him/her.
Posted by Rean House at 6:40 PM No comments:

I just finished my Wilton Course II and am now presenting my readers (all 2 of you) with my final project. *drumroll please* 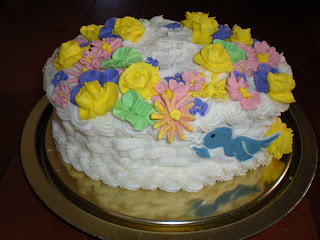 A few months after we were married Chris told me he was going to build me a light up model of the Titanic. Tonight it's finally finished (according to me anyway, Chris still wants to make some minor adjustments). So here, for your wondering eyes to behold, after a long 3 year wait is (drumroll please) the TITANIC! 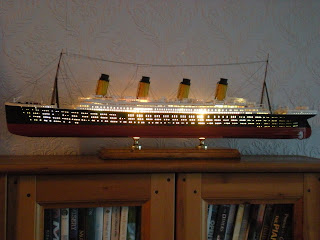 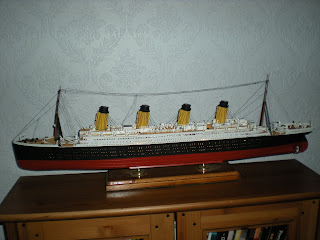 Posted by Rean House at 8:03 PM No comments: 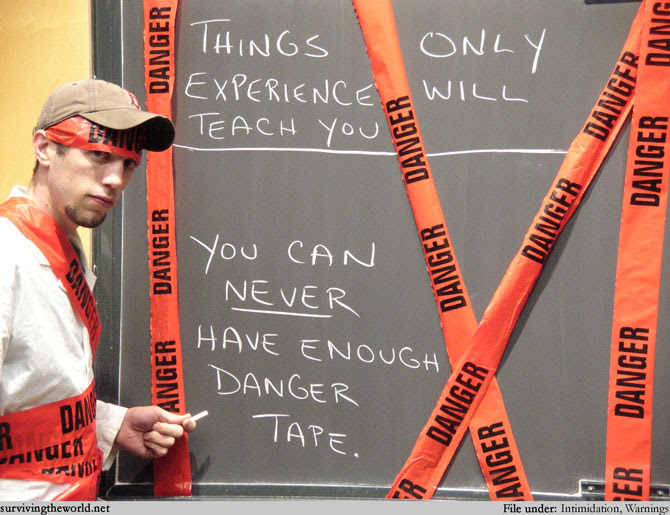 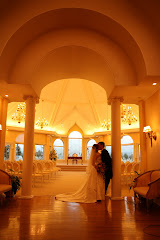 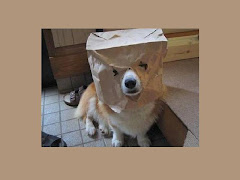 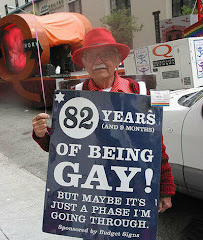 Rean House
We, Sarah and Chris, live in Canada with our 4 furry "kids".